A World Tour of Flowers

On the 26th March, it’s Mother’s Day. It’s also when spring really gets underway, the sun comes out and the flowers start blooming. In the spirit of the season, here is our guide to some of the finest floral destinations in the world – and perhaps, a guide to perfect places to take Mum to say thanks. 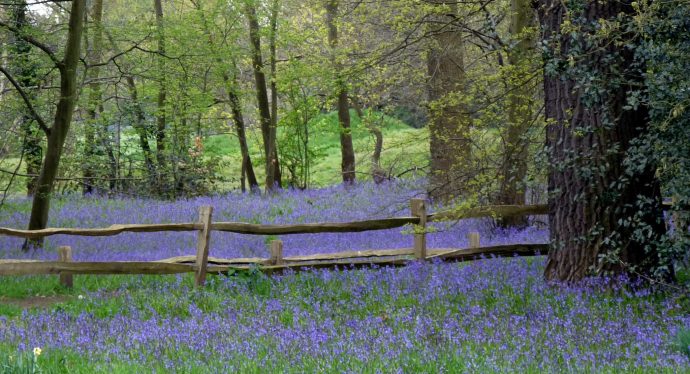 There’s only one place in the capital that is truly celebrated for its floral displays: the Royal Botanic Gardens at Kew. It is without doubt London’s premier destination for anthophiles – that’s flower lovers to me and you. One of the highlights in the spring months is the carpet of bluebells that grows every spring on the ground surrounding Queen Charlotte’s Cottage, a small building built around 1771 by King George III for his wife. Blueballs are one of those wonderful English flowers that bring so much joy as a herald of warmer weather and longer days to come. There are few nicer settings to see them than at Kew – and certainly none in London.

Kew is also an excellent place to see some Japanese cherry trees. Finding this iconic spring tree blossoming in its native far eastern home can be difficult – not to mention expensive – so Kew Gardens is a fine substitute. It’s no match for Kyoto, Kew has the largest concentration of cherries in London, and they’ll bloom just as spectacularly as any. 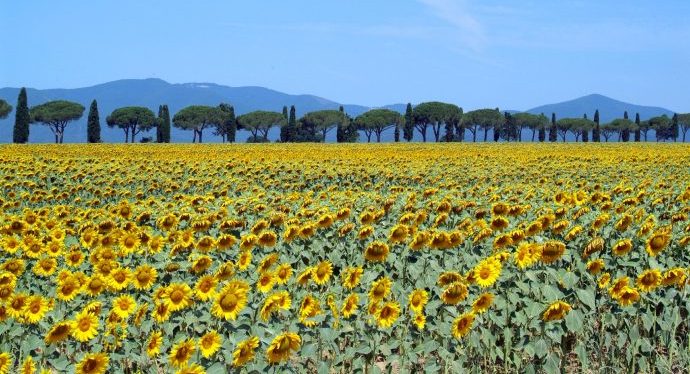 Tuscany is a beautiful place all year round, but in high summer, field upon field of cheerful sunflowers turn this Italian region into a real paradise. The first shoots begin to appear in June, and by July the fields turn a vibrant yellow as the heads of these sunflowers emerge to face the sun. Seeking out these fields in bloom can be a challenge, and there are no reliable guides. Your best bet is to rent a car and go on an adventure around Tuscany looking for these beautiful flowers. In a place as stunning as Tuscany, that’s hardly a chore. You can also find similar fields in the neighbouring reigons of Umbria and Le Marche – in the latter, they bloom slightly earlier.

An alternative is the Roeseto Fineschi Bortanical Garden, located in the province of Arezzo in the east of Tuscany. This is home to an expertly created and maintained rose garden, the result of thirty years of work by Professor Gianfranco Fineschi. This small garden – just a single acre – contains 7,000 varieties of rose, more than any other private collection in the world. It is a living laboratory, even containing some species that were once thought to be extinct. It is open between the first Sunday in May and the last Sunday in June. 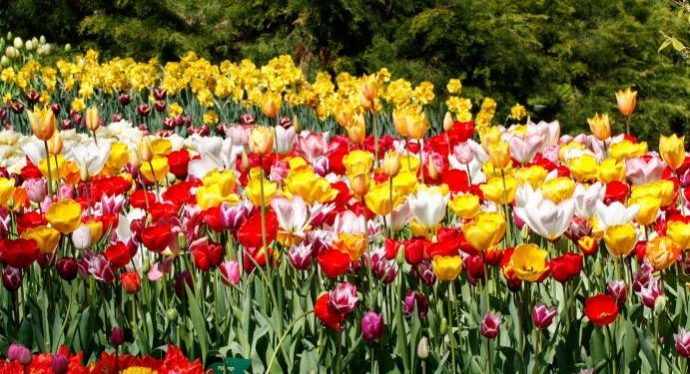 You can’t write a list of floral destinations without including the Netherlands. Tulips are indelibly linked to the country as a national symbol, and every year hundreds of thousands of people visit to see these beautiful flowers in bloom. The most famous garden in the country is Keukenhof, known as the Garden of Europe, in the town of Lisse, a little to the southwest of Amsterdam. Keukenhof is a stunning visual feast, with iconic tulips of all colours covering the ground. It’s home to a variety of different gardens, including the English landscape garden with its winding paths, and the nature garden with its water garden and shrubs. This year, the theme is ‘Dutch Design’, which features flower art and shows inspired by artists like Mondriaan and Rietveld. Though only open between March and May, this garden is not to be missed. 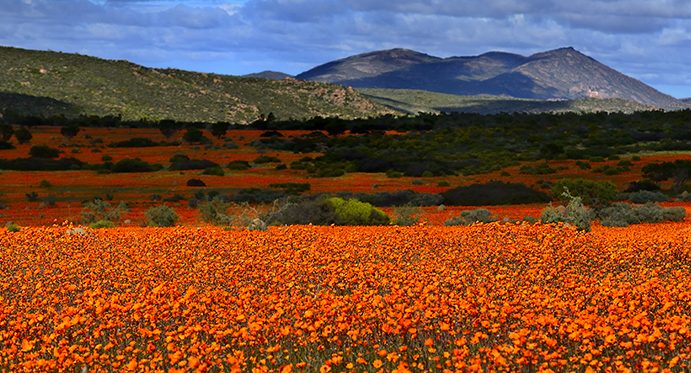 But what about the southern hemisphere? On the other side of the globe, it’s currently autumn, but there’s plenty of floral delights to be found in the spring months. In South Africa, spring lasts between September and November, and in the Western Cape region this means one of the world’s most diverse areas of floristic beauty blooms into life. So profound is its beauty that it has been designated a UNESCO World Heritage Site. Although most notable for its shrubland, it is also home to a wide variety of colourful wildflowers. One of the best places to see this natural beauty is the Namaqua National Park to the north of Cape Town, a perfect place for hiking. Here, spectacular carpets of wildflowers dominate the landscape, including South Africa’s national flower, the spiky king protea.

For a few more tips for what to do in the Western Cape, take a look at our guide to the region here.